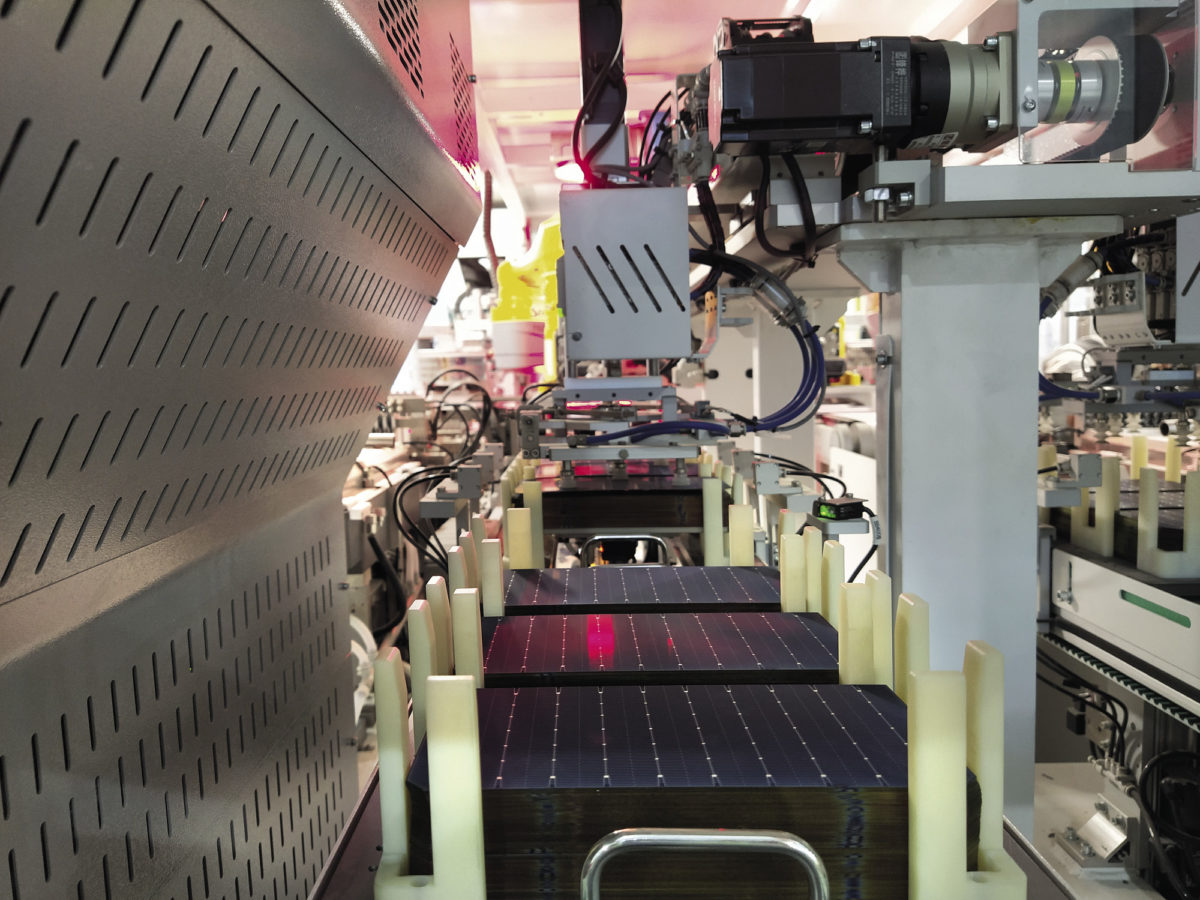 The Indian solar manufacturing sector is well poised for growth to cater to both the country’s domestic and international markets. A recent report from ratings and research company Crisil predicts that the country could add a potential 30 GW to 35 GW of integrated cell and module capacity by the end of the 2024-25 fiscal year, on top of 3 GW of cells and 8 GW of module capacity in place as of March 2021.

Fueling the growth are government initiatives like the production-linked incentives (PLI) scheme for high-efficiency solar cells, the 25% basic customs duty on PV cell imports, and an ambitious 2030 target of 500 GW of non-fossil fuel energy capacity, with solar set to contribute at least 280 GW.

Solar tenders or regional programs that mandate the use of only domestically produced PV cells and modules also accelerate the demand for locally produced products – and are driving the installation of new lines. Such programs include the Central Public Sector Undertaking (CPSU) Scheme aiming to drive 12 GW of solar capacity for public entities and the KUSUM Scheme targeting 30.8 GW of solar to be installed on agricultural land by December 2022.

The Ministry of New and Renewable Energy (MNRE), in its drive to reduce India’s dependence on solar imports and achieve self-sufficiency, has also made it mandatory for solar cell and module manufacturers to register under the Approved List of Models and Manufacturers (ALMM) to be eligible for a wide range of government-backed projects.

Considering the favorable policy environment, various Indian solar PV manufacturers have planned to expand existing or install new solar cell production capacity. However, the big question is whether the Indian cell manufacturers will go down the tested route and attempt to replicate China’s success based on mono PERC (passivated emitter and rear cell), or leapfrog to n-type technologies.

Indian industry observers tend to agree that the vast bulk of the new capacity will be mono PERC with a small allocation for advanced technologies. The reason for the conservative approach being that Indian PV manufacturers lack experience in cell production and the complicated and capital-intensive process required for n-type.

Vinod Kaul, the technical director of Gujarat-based manufacturer Pixon, says solar manufacturers in India should go for mono PERC and tunnel oxide passivated contact (TOPCon) cells in a big way while continuing to investigate heterojunction (HJT). As for interdigitated back contact solar cells (IBC), Kaul notes, it involves a complicated production process and should be avoided for now.

Mono PERC provides an easier transition for manufacturers in India that have been primarily making polycrystalline back surface field (BSF) cells. Kaul explains that conventional BSF technology will fade out as its efficiency has reached its upper limit. Also, older equipment for BSF production is unable to handle large-size wafers, necessitating equipment updates that would be difficult to amortize given the efficiency limits.

“Mono PERC offers a very good efficiency compared to multicrystalline cells while requiring only three more steps to be added to the conventional BSF process. The steps to be added include oxide passivation from the backside, laser ablation on the backside for the contacts, and single-side chemical etching,” says Kaul.

Chiranjeev Saluja, managing director of Hyderabad-based Premier Energies, expects approximately 50% to 75% of the new cell capacity in India to be based on M10/G12 wafer formats, on a mono PERC technology platform. The rest, Saluja adds, will utilize n-type technologies. He reasons mono PERC is much more stable and that the mass production of the higher-efficiency solar cells takes almost six to eight months post-commissioning.

Vikas Arya, the associate vice president of product strategy for distributed energy producer Jakson Group, feels n-type cells might only become a mainstay technology from 2025-30. Within n-type, he expects TOPCon to be adopted rather than HJT.

Anil Kottantharayil, HAL R&D chair professor in the Department of Electrical Engineering at IIT Bombay, recommends TOPCon on p-type wafers, as it provides a smooth transition from p-type PERC. Also, with gallium doping, p-type wafers do not suffer from the boron-oxygen defect-related performance losses, Kottantharayil added.

Manufacturer choices of technology will also be guided by whether they will cater to the local market only or eye exports. Bridge To India Managing Director Vinay Rustagi believes that most companies entering large-scale cell and module production will have one eye on export markets, so they will like to stay with the latest technologies. But he still expects most companies to go with mono-PERC lines initially.

“Exceptions may be companies planning larger capacities,” said Rustagi. “They may reserve part capacity for more advanced technologies. Given the high pace of technology change, all companies are bound to maintain sufficient flexibility in their plant design so that they can upgrade anytime depending on market conditions,” he added.

The changing geopolitics provides Indian manufacturers with good reason to eye exports. The European Union and North America are currently the most lucrative markets.

Vivek Srivastava, chief executive officer for Waaree Energies, says North America and Europe are increasingly looking at a “China-plus-one” strategy for securing their supply chain. Outside China, India is the most natural source. The anti-circumventing and anti-dumping duty investigation in the United States also augurs well for manufacturing in India for export to the market.

“The US ban on the import of panel material originating from Xinjiang province and diversifying sourcing policies would be key positive drivers for Indian-make modules,” said Gyanesh Chaudhary, managing director of Vikram Solar. “This will be supported by the domestic expansion of capacity and newer technology lines being set up to cater to incremental demand. Also, on Feb. 4, 2022, the Biden administration extended the Section 201 tariffs imposed on the import of solar modules from China for four years, which would be a positive growth driver for domestic module exports.”

The EU and US regions would be a key driver for export demand from India, Chaudhary added, given up to 35 GW to 40 GW and 25 GW to 30 GW of annual solar addition potential in these markets over the next four to five years.

Vikram Solar has 2.5 GW of installed manufacturing capacity for solar PV modules and plans to add a new 2 GW facility to manufacture solar modules with backward integration for solar cells. It has also submitted a bid for setting up 3.6 GW of integrated cell and module capacity under the PLI scheme. The company is working on developing highly efficient solar PV modules using cell types such as n-type TOPCon.

Challenges to PV cell manufacturing in India range from lack of raw materials and production equipment to the supporting infrastructure.

Pushpendra Samadhiya, national head–key account sales for Saatvik Group, said that cell manufacturing lines in India completely depend on imports for raw materials. “Only 10% to 15% of bill-of-materials (BOM) components are available locally, and the rest are imported,” said Samadhiya. “There is also the lack of auxiliary industries like ingots, wafers, silver pastes, aluminum paste, and silver-screens.”

The Indian government has taken initial steps toward creating self-reliance by introducing the PLI scheme, which encourages the setting up of a complete ecosystem to manufacture solar PV cells and modules in-house. The PLI scheme offers funding support to bidders who commit to setting up fabs to produce everything from polysilicon to PV modules in India.